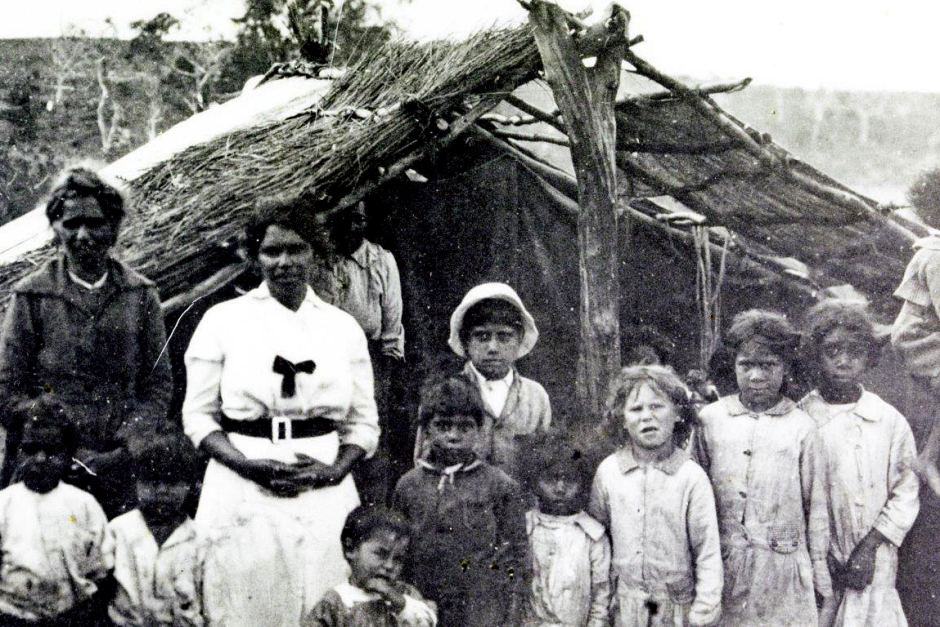 A photograph from the Moore River Native Settlement, shown in the article A Journey into 'hell on Earth' by Nicolas Perpitch on the ABC website.

When I came to live in Australia in December 2008, I knew little about the past government policy of removing Australian Aboriginal and Torres Strait Islander children from their families. This policy was introduced by Federal and State government acts in order to assimilate Aboriginal and Torres Strait Islander children into the white-dominated society of Australia. In essence, to help ‘make’ these children ’white’. Children taken from their families as a result of this policy are now known as the ‘Stolen Generations’.

I felt embarrassed that I did not know more about the Stolen Generations, particularly as I am a person who is very well read. However, I was soon to realise that I was just one of a vast majority of people outside Australia who knew nothing about Australia’s policy of removing Aboriginal children (in particular children of mixed race) from their families. In fact, I know few people outside of Australia who have heard of this policy. It is one of Australia’s best kept ‘secrets’.

I soon read a great deal about the Stolen Generations including the excellent Bringing them Home Report (1997). You can find the report and other information on this Australian Human Rights Commission page, the pdf document here and a full contents page here. If you’re going to read the report, be prepared for a very long and emotional read.

Today, I want to ensure that many more people around the world learn about the Stolen Generations and realise the impact that removing children from their families has on the child him/herself and the rest of his/her family and community. A major way that I am doing this is by developing The Carrolup Story online resource with John Stanton, as well as writing a book focused on the Aboriginal child artists of Carrolup. The first three chapters of this book provide a social, political and cultural background to the main Carrolup story. This background includes a description of the West Australian policy towards Aboriginal people and its impact.

I will be talking about the Stolen Generations much more over the coming months, but for now I will leave you with an informative and excellent film I found today, made by Monash University, with assistance from the National Museum of Australia. The film was written by Professor Bruce Scates and presented by Bruce and Dr Susan Carland. It is well worth spending 18 minutes of your time to watch the film. The second half of the film features the Moore River Native Settlement.

The history of forced removal of Aboriginal and Torres Strait Islander children from their families in Australia.

The article quoted in the figure legend can be found here.