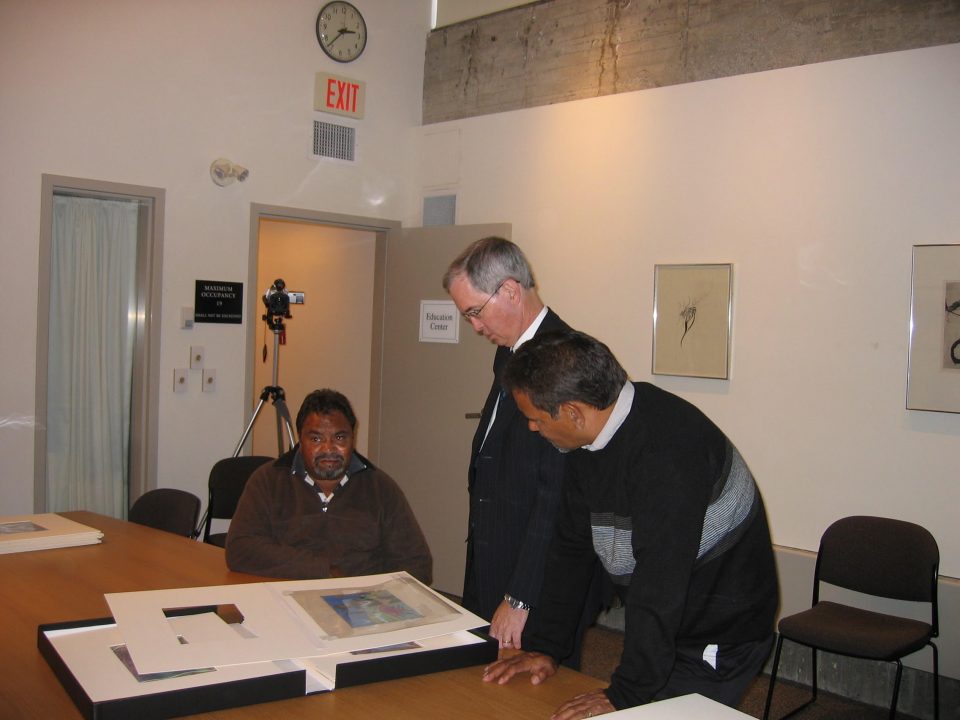 In 2004, John Stanton’s close Australian friend Professor Howard Morphy is invited to visit Colgate University in Upper New York State by the Director of Colgate’s Picker Gallery. The Gallery set aside some Aboriginal artefacts for him to look at. When Howard arrives, the Gallery Curator, Diane Butler, mentions that they have a box labeled Australian art, but she has never opened it.

When they open the box, Howard immediately recognises a beautiful Revel Cooper drawing sitting on the top. Underneath are a large collection of Carrolup drawings. Howard is possibly the only other anthropologist to be in a position to recognise these works for what they are. He calls John Stanton, who is stunned to hear that Mrs Rutter’s collection is no longer ‘lost’.

John Stanton travels to Colgate University with Noongar men Athol Farmer and Ezzard Flowers in April 2005. The three men ask that they be allowed some time in the room alone with the artworks. It is extraordinarily emotional for them to hold the artworks, thinking about boodja, thinking about the children who had made them, and thinking of what these iconic objects now represent to the Noongar community today. They cry for some time, making sure their tears do not fall not on the art.

John and his colleagues arrange for about 20 pieces of the children’s art to be temporarily returned to Western Australia in February 2006 for the Koorah Collingah (Children Long Ago) Exhibition in Katanning, as part of the Perth International Arts Festival (PIAF). [Podcast at 21’20”, John Stanton & Ezzard Flowers] The impact on the local community of the return of the art is immeasurable. A twinned PIAF exhibition comprising the Carrolup artworks held at the Berndt Museum of Anthropology takes place in the Western Australian Museum in Perth.

Colgate University eventually makes the decision to permanently return the artworks to Noongar country. In May 2013, they are moved to Curtin University in Perth, where they are housed in the John Curtin Gallery as The Herbert Mayer Collection of Carrolup Artwork.

A Long Way from Home: John Stanton, Ezzard Flowers and Athol Farmer travel to Colgate University in the US to see the long-lost Florence Rutter collection of Carrolup artworks.

Carrolup Art Arrives from Colgate University, 2006: I think some of us might even have forgotten to breathe, such was the excitement, and significance, of these moments.

Official Opening of ‘Koorah Coolingah: Children Long Ago’, Katanning 2006: Thousands flock to Katanning to see the return of key Carrolup artworks to Noongar boodja (country) for the first time in over fifty years.

Homecoming of Carrolup Artworks: The child artists of Carrolup ignited a flame, a flame that still burns—a flame that is embodied by the ritual burning of a balga, a grass tree, at the end of the Official Opening.

Guests See ‘Koorah Coolingah’, Katanning Art Gallery, 2006: It was a very emotional moment; there was a mixture of pride and sadness, sadness that all but one of the Child artists (Milton Jackson) had passed on.

Milton Jackson’s Long Lost Drawing: The last surviving Carrolup artist, Milton Jackson, was reconnected with an artwork he drew about 55 years earlier; he was later presented with a ‘replica’ of his drawing.