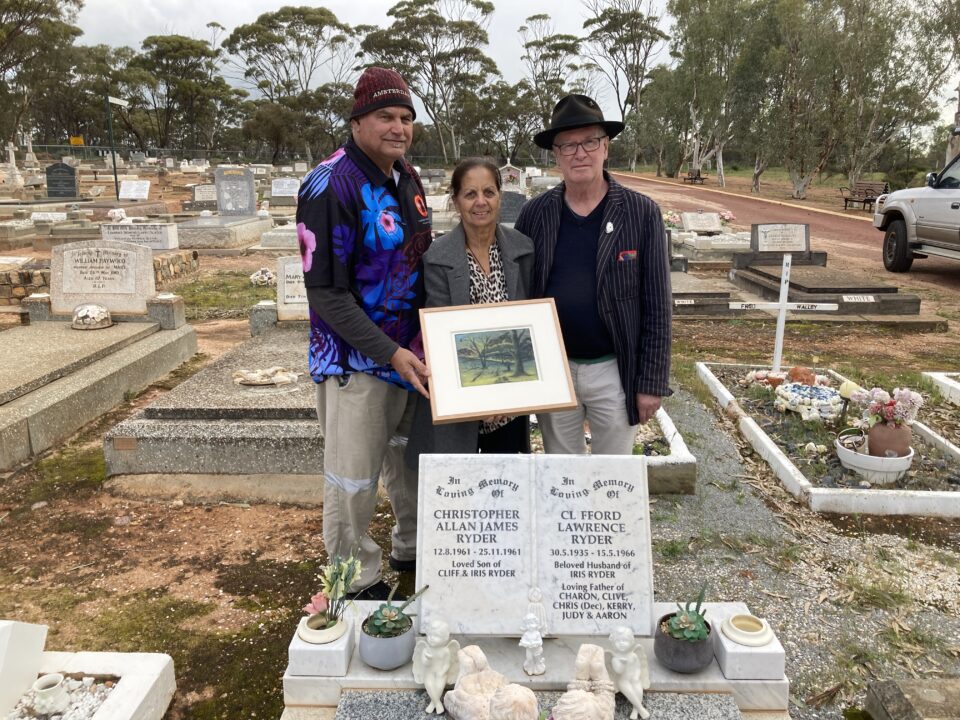 L-R: John Kalin, Charon Kalin (née Ryder) and John Stanton at the gravesite of Cliff Ryder, one of the renowned Aboriginal child artists of Carrolup. Charon has just been presented with an example of her father Cliff's artwork by Ellen Spalding, whose father was given this work in 1957. Photograph: David Clark, 6 August 2022.

Last week, I wrote about the beautiful relationship John and I have with the family of Cliff Ryder, one of the renowned Aboriginal child artists of Carrolup. There, I linked to the nine blog posts I have written about the family over the past three years, in particular about Cliff’s eldest daughter Charon and her husband John Kalin.

In my previous post, I also briefly described a day’s outing that John Stanton and I had with Charon and John Kalin, and a visitor from Melbourne, Ellen Spalding, on Saturday, 6 August. We visited Moore River Native Settlement (also known as Mogumber Farm), and later the Reserve and Cemetery (where Cliff Ryder is buried) in Goomalling.

Ellen first contacted us through this website in October 2019 and asked if we could put her in touch with Cliff Ryder’s family. Her father, the late Ian Spalding, who was very concerned about the way Aboriginal people were being treated by white society, had travelled around mainland Australia in the 1950s (and subsequently) visiting each Aboriginal community. In the course of his travels, he assembled an extensive collection of photographs to show the living conditions that Aboriginal peoples were experiencing at that time.

During his travels, Ellen’s father visited Marribank (formerly the Carrolup Native Settlement) where he was given a small pastel drawing done earlier by Cliff Ryder. Later in life, he had tried to trace Cliff’s family, to no avail. Ellen’s mother Barbara wanted to ensure that his wishes to have the drawing returned to the family would happen. She had the drawing framed professionally, and Ellen planned to visit Perth to give the drawing to the Ryder family on Barbara’s behalf.

Now, nearly three years later, we are assembled beside the grave of Cliff Ryder, who is buried alongside his son Christopher, in Goomalling Cemetery. Ellen is handing Charon her father’s artwork. It is such an incredibly moving occasion. We are all in tears.

We each invite you to look at this eight-minute film of the Presentation.