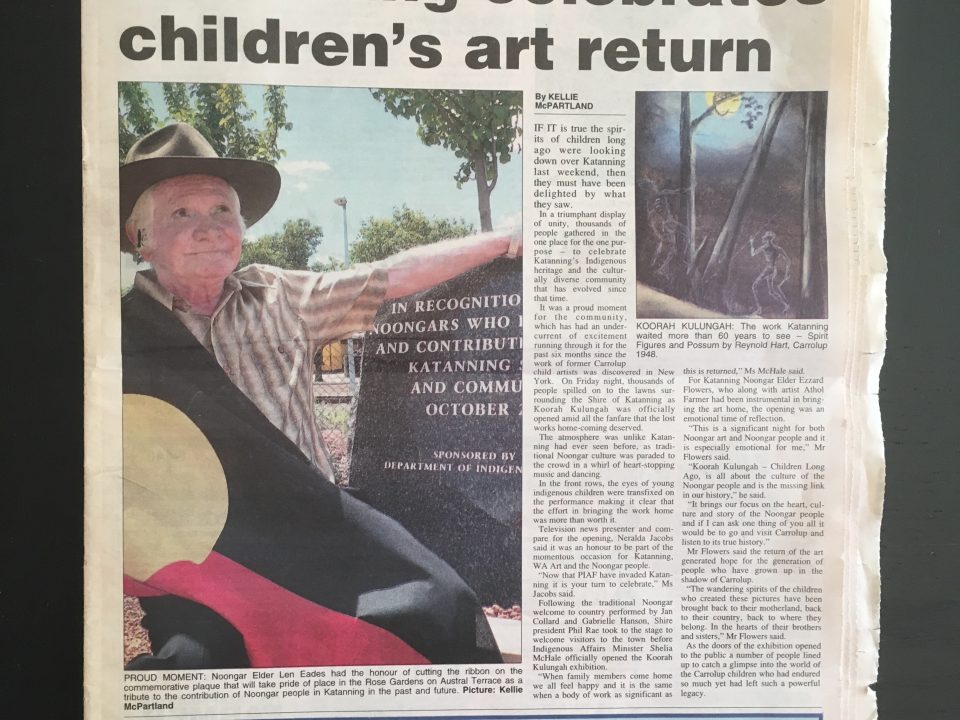 One of the main reasons we have developed this website and are working on a book about the Aboriginal child artists of Carrolup is that it is essential that this story does not wither away or become distorted. You might think that this is unlikely, but many important historical stories disappear or become distorted over time.

Already, there is very little written about the story of Carrolup. One of the points made to me by some Noongar Elders is that far too few of their people know the Story. And very few Aboriginal and non-Aboriginal people know the story to any depth.

The collection at the John Curtin Gallery is the missing ‘Florence Rutter Collection’ that was purchased from Mrs Rutter by American television magnate Herbert Mayer in 1958. He, in turn, gifted the collection to Colgate University in upstate New York in 1966. The art remained there in obscurity for decades until it was discovered by Professor Howard Morphy of Canberra in 2004.

After finding these Carrolup drawings, Howard called John Stanton, who had been looking for this lost collection for 20 years, about his find. John, along with Noongar men Athol Farmer and Ezzard Flowers, visited Colgate University in 2005 to see the art and requested that 20 pieces be temporarily returned to Noongar country for an exhibition in Katanning. Colgate University kindly agreed and these Carrolup drawings were returned for the Koorah Coolingah: Children Long Ago exhibition, which began on the 24th February, 2006.

Since starting this project, I have been surprised by how few people who I have met knew that part of the Carrolup collection at Colgate University had returned temporarily in 2006. They only knew of the permanent return of Carrolup artworks to Curtin University in 2013. I started to Google the 2006 exhibition using various terms and it was almost as if this initial return of the art had never occurred. This is what I mean by my concern about elements of a story withering away.

Recently, Gael Phillips [of the Stan, Melvie and Gael Phillips Collection] sent me a hard copy of the Great Southern Herald article about the Koorah Coolingah [or Koorah Kulungah, as they write] exhibition in 2006. Thank you, Gael! I thought I’d post the whole article below, which is both well-written and very moving, so that it remains in circulation.

If it is true the spirits of children long ago were looking down over Katanning last weekend, then they must have been delighted by what they saw.

In a triumphant display of unity, thousands of people gathered in the one place for the one purpose – to celebrate Katanning’s Indigenous heritage and the culturally diverse community that has evolved since that time.

It was a proud moment for the community, which has had an undercurrent of excitement running through it for the past six months since the work of former Carrolup child artists was discovered in New York. On Friday night, thousands of people spilled on to the lawns surrounding the Shire of Katanning as Koorah Kulungah was officially opened amid all the fanfare that the lost works home-coming deserved.

The atmosphere was unlike Katanning had ever seen before, as traditional Noongar culture was paraded to the crowd in a whirl of heart-stopping music and dancing.

In the front rows, the eyes of young indigenous children were transfixed on the performance making it clear that the effort in brining the work home was more than worth it.

Television news presenter and compare for the opening, Neralda Jacobs said it was an honour to be part of the momentous occasion for Katanning, WA Art and the Noongar people.

“Now that PIAF have invaded Katanning it is your turn to celebrate,” Ms Jacobs said.

“When family members come home we all feel happy and it is the same when a body of work as significant as this is returned,” Ms McHale said.

For Katanning Noongar Elder Ezzard Flowers, who along with artist Athol Farmer had been instrumental in bringing the art home, the opening was an emotional time of reflection.

“This is a significant night for both Noongar art and Noongar people and it is especially emotional for me,” Mr Flowers said.

“Koorah Kulungah – Children Long Ago, is all about the culture of the Noongar people and is the missing link in our history,” he said.

“It brings our focus on the heart, culture and story of the Noongar people and if I can ask you one thing of you all it would be to go and visit Carrolup and listen to its true history.”

Mr Flowers said that the return of the art generated hope for the generation of people who have grown up in the shadow of Carrolup.

“The wandering spirits of the children who created these pictures have been brought back to their motherland, back to their country, back to where they belong. In the hearts of their brothers and sisters,” Mr Flowers said.

As the doors of the exhibition opened to the public a number of people lined up to catch a glimpse into the world of the Carrolup children who had endured so much yet had left such a powerful legacy.’