Carrolup Drawings Return to Katanning: A Story of Stories 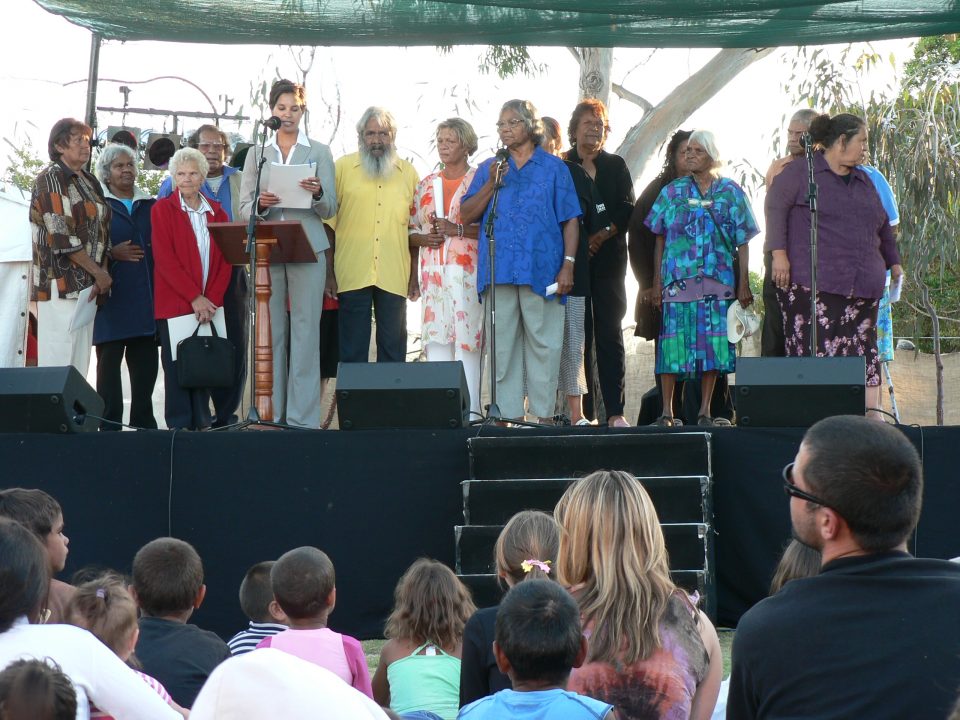 Norelle Jacobs introduces Gabrielle Hansen (far right) and Janet Collard (centre) to give the Welcome to Country at the Official Opening of the ‘Koorah Coolingah’ exhibition, Katanning, 24th February 2006. Berndt Museum of Anthropology, The University of Western Australia.

The blogs that John and I write for the website are stories that form part of the fabric of the story of Carrolup, past and present. In our early days of development, John wrote a number of blogs about the ‘rediscovery’ of Mrs Rutter’s collection of Carrolup drawings and their return to Katanning in 2006. Together, these blogs form a larger story which can be read by following the series of links below.

A 71-year old Englishwoman Mrs Florence Rutter first visited Carrolup in July 1949. She bought a collection of the children’s drawings for £5 that she showed in eight cities around Australia and New Zealand over the following five months.

Florence revisited Carrolup at the end of January 1950. She was totally captivated by the Carrolup boys—the girls had been moved to missions by this time—and their art. She was given permission by the Department of Native Affairs to exhibit and sell Carrolup drawings in Europe, with money being put into a Trust Fund for the boys.

Florence exhibited the art in The Netherlands and England in 1950 to great acclaim. However, the Department of Native Affairs closed Carrolup School in December 1950. Although Mrs Rutter continued to exhibit the art in the UK during 1951 and 1952, she received no new Carrolup drawings from Noel White.

Mrs Rutter was later swindled of her savings by a conman and in 1956 she had to sell her Carrolup collection to American television magnate Herbert Mayer. She passed away in 1958, her dreams of helping the Carrolup boys shattered. The drawings in effect disappeared.

Here are a series of blogs by John that continue this story [these blogs contain short film clips]:

Reconnecting: Noongar leader Ezzard Flowers talks about the Carrolup boys and their connection to country, cultural awareness programs and Aboriginal healing, in an interview for the University newspaper Colgate Scene.

Carrolup Art Arrives from Colgate University, 2006: There is great excitement at the Katanning Art Gallery as preparations are made to unscrew the lids of the crates containing the Carrolup drawings, an event attended by Milton Jackson, the last surviving Carrolup child artist.

Official Opening of ‘Koorah Coolingah: Children Long Ago’, Katanning 2006: The 24th of February 2006 is a big day for Katanning as the 20 Carrolup drawings loaned by the Picker Gallery at Colgate University are to be exhibited as part of the Perth International Arts Festival.

Aboriginal Children Dance at the Opening of ‘Koorah Coolingah’: Aboriginal school children from Katanning practise for weeks before dancing in costume and with body painting.

Homecoming of Carrolup Artworks, 2006: John Stanton and Howard Morphy feel overwhelmed at the excitement during the Opening, particularly when a Balga Tree is ceremonially burned in respect for the Carrolup child artists.

The Carrolup drawings were returned to the Picker Gallery at Colgate University after the ‘Koorah Coolingah’ exhibition.

Colgate University eventually made the decision to permanently return the artworks to Noongar country. In May 2013, they were transferred to Curtin University in Perth, where they are housed in the John Curtin Gallery as The Herbert Mayer Collection of Carrolup Artwork.