Magical Happenings in Carrolup Schoolroom and Beyond 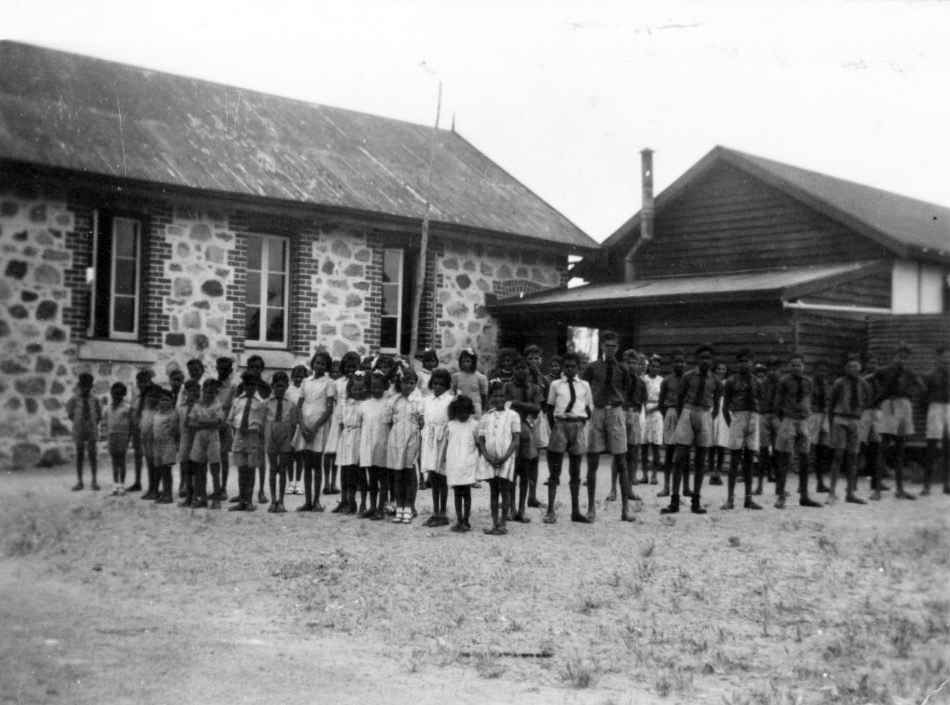 The boys and girls of Carrolup outside their school classrooms. Photographer: Noel White in 1948/49. Noel & Lily White Collection.

Some months ago, I thought it was time to write a blog post summarising major happenings at Carrolup Native Settlement during the second half of the 1940s. However, I didn’t post the summary immediately and then forgot all about it. Recently, I was going through the website database and found the article. I think it’s time I posted it to the website. The article contains a large number off articles about the story of the Aboriginal child artists that we have posted on our Story blog. I hope you enjoy.

Most people I know focus on the beauty of the landscape drawings completed by the Aboriginal children of Carrolup Native Settlement. Although I too love these drawings, I am more fascinated by what happened in the school classroom after teacher Noel White arrived at Carrolup. How did the children ‘transform’ so markedly, from ‘running wild’ and being fearful to displaying positive personal values and a strong sense of community, along with achievements in art, schoolwork, music and sport, a few years later?

The story of Carrolup has to be considered in the context its backdrop, the process of colonisation by the British, which saw Aboriginal peoples impacted upon by violence, disease, abductions, taking of their land, destruction of their culture, social control, and removal of their children. The trauma that was created by these events, transgenerational trauma, has been unwittingly passed down the generations.

I have written about the terrible events that happened to one of the most famous of the Carrolup artists, Revel Cooper, just prior to after his arrival at Carrolup. Revel’s mother Rita Hill died during an operation when Revel was either five or six years old. His father James Cooper asked Rita’s parents, Joseph Hill and Julia Mourish, if they would look after Revel and his four siblings, which they agreed to do. However, the authorities made the children Wards of State and removed them to Carrolup Native Settlement in May 1940. Three weeks later, Revel’s brother Carl died of enteritis—he was not yet one year old. Two other brothers suffered from enteritis but recovered, although doctors said they would ‘never be strong’.

‘Two other boys who are always in similar trouble are Burgess Williams & Revel Cooper although practically all are likely to start a fight if any child looks at them at the wrong moment. They appear to lack understanding of each other – whole mental attitude is too self centred and the inferiority complex seems very evident. They are intensely jealous of each other. While this can be used as a lever to improve their own work it also acts as a cause for a fight if the child beside them is always better. They are only interested in the child inside them!!’ Olive Elliot, School Journal, 22nd June 1945

We now know that the behaviours exhibited by the children are signs of trauma. Mrs Elliot eventually decided the children needed a male teacher and approached Noel White, who agreed to apply for the job. He was appointed as the Carrolup teacher and started in May 1946. Revel Cooper described what the children thought about Noel White upon his arrival:

‘The first week at school with our new teacher we were all scared stiff. I think if it wasn’t for the ever present smile of Mr Whites we would have all stormed out of the school and ran for our lives.’

About eight months later, 76 Carrolup children attended the Katanning Show. Presumably, there must have been quite a change in the children’s behaviour to have been taken to such a public event.  Note the following comments: from Noel White in the School Journal (top) and a comment in the Great Southern newspaper:

‘The deportment and behaviour of the children were exemplary and many favourable comments were passed.’ Noel White, School Journal, 8 November 1946

‘… exhibits were remarkably good and many could have competed in the open classes, the imaginative drawing being particularly distinctive.’ Great Southern Herald, 8 November 1946

In 1947, the Education Department asked children from around Western Australia to submit articles and drawings relevant to the life of Western Australia’s first Premier. The best of these articles and drawings were to appear in a booklet about the life of John Forrest, edited and compiled by Mr John Placid Stokes. Carrolup had three articles and one drawing accepted for the booklet. Only one other school in the State,  prestigious Perth Modern, had more submissions accepted! [See Early Public Acclaim]

Mr Stokes asked Noel White if he would submit more drawings to be shown at the Forrest Centennial exhibition held in Perth and Fremantle in August 1947. Max Praed wrote an article about the Carrolup children and their teachers—Noel’s wife Lilly was now teaching the youngest children—for the Sunday Times in July 1947, in which he heralded the outstanding artwork of the children, emphasised the high quality of their schoolwork, and described  the other activities in which they were engaged. He pointed out that the Whites, ‘… may have developed something of real value to the cultural life of the State.’

John Stokes suggested to Noel White that the children have their own exhibition. The Department of Native Affairs agreed and the major department store Boans hosted a four-day exhibition in October 1947 in which 450 Carrolup drawings were exhibited. Four of the boys demonstrated their skills at the exhibition. Reviews of the Exhibition in The West Australian were favourable, and a total of £120 was raised from art sales and donations. [The sum of £120 is equivalent to just over $8,000 in today’s money.]

When Noel White showed the children’s drawings at a Convention of Departmental teachers held in Albany in June, his audience refused to believe that the the work is ‘too good to be true’ and that it was asking too much of the public to accept this as unassisted children’s art. Noel headed back to Carrolup to pick up three of the boys who stunned their audience the following day when demonstrating their skills. All 96 pieces of art were snapped up by the public soon after.

The Carrolup children not only continued to impress the public locally with their art, but their football team was easily beating local school teams. They travelled to Perth in 1949 where they thrashed Thomas Street school and two days later beat a combined Thomas Street / Perth Modern team (the later were older boys). Both games were at Subiaco Oval, with the first game being attended by an audience of 2,000 and the second held before a semi-final game in the senior Western Australian league–presumably a much larger audience saw the boys’ game.

The Carrolup children and their artworks attracted attention further afield after 71-year-old Englishwoman Mrs Florence Rutter visited Carrolup in July 1949. She purchased some of their artworks and exhibited them in eight cities around Australia and New Zealand, attracting a good deal of publicity.

Mrs Rutter returned to Carrolup in January 1950 (with a friend, Mrs Vera Hack), by which time the girls had been sent away to missions elsewhere. Her comments about the boys show a dramatic change to that described by Mrs Elliot back in 1945.

‘Speaking for myself I must relate how delighted and surprised I was with their behaviour. In every way they were exemplary – attentive, interested, appreciative, grateful, polite, unselfish, sporting and physically courageous. I hope that my own grandchildren will develop these traits as definitely as these little aboriginal boys.’

‘These aboriginal children have the real spirit of community life – they are non-possessive and quite definitely non-acquisitive! The older boys appeared to take a pleasure in showing the younger how to do things. They are extremely intelligent and have remarkably retentive memories. Hence they learn rapidly and retain what they are taught.’ Florence Rutter, Little Black Fingers, 1950, pp. 5-6 [Emphasis in original]

After purchasing artworks from the school, Mrs Rutter was given permission by the Department of Native Affairs to exhibit and sell the children’s work in Europe, with all money being sent back to the Department, purportedly for the children’s use. I won’t go into much detail here, other than to say the artworks were exhibited in The Netherlands, England and Scotland over a two-year period to great acclaim. Two Royal Houses praised the artworks. Mrs Rutter said of the boys to Mr Middleton, Commissioner of Native Affairs:

‘These boys, at least 50% of them will develop their technique and turn out pictures equal to that of Albert Namatjira & he can earn £1500. He was given his chance &  encouraged even taught how to paint by Rex Batterbee, also he is a man of 45 – whereas these youngsters of 12 to 14 have years to improve by practice without tuition their natural gifts if they are allowed to do so!’ [Emphasis in original]

Five months later, the school at Carrolup Native Settlement was closed the Department of Native Affairs and the boys were scattered. Their dreams of a better future are shattered by this closure, and by the adversities they face in a white-dominated society that considers them ‘inferior’.

Their artworks continue to be exhibited in Europe until 1952. However, Mrs Rutter was later conned by a swindler and eventually sold her collection to an American, Mr Mayer. Her collection disappeared for nigh on 50 years.